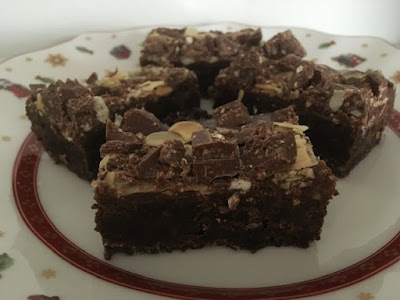 Have yourself a merry little Christmas (Judy Garland, Meet Me in St Louis)

On the weekend, I had a friend over for Christmas lunch. I kept it simple - cheese and dips and olives and crackers to start, roast chicken and vegetables for main, and for dessert, a delightfully rich Toblerone brownie from the Coles magazine.

This brownie has an awful lot of chocolate in it, so it’s not for the faint-hearted: 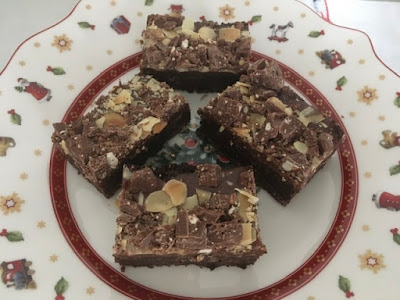 However, I knew that my friend loves brownies, so I was on a winner.

To make these brownies, you will need:

Preheat your oven to 180 degrees Celsius and grease and line a 20cm square cake tin, with paper overhanging the sides as a handle to release the brownies.

Put the butter, chopped dark chocolate, vanilla and sugar in a saucepan over medium heat and cook, stirring,  until melted and smooth. Allie the mixture to cool slightly then ehisk in the eggs.

Using a rubber spatula, fold in the flour, cocoa and 150g Toblerone, them scrape the batter into the prepared tin.

Bake the brownies for 45-50 minutes or until cooked through.  Allow the brownies to cool completely in the tin.

To make the topping, put the cream in a small saucepan and bring to a simmer. Simmer for 5 minutes or until the cream thickens slightly.

Add 150g Toblerone to the cream snd stir until the chocolate is melted and has combined with the cream. Pour the topping over the cooled brownie in the tin. Allow the topping to cool slightly before sprinkling the top of the brownies with the remaining 150g Toblerone and toasted flaked almonds.