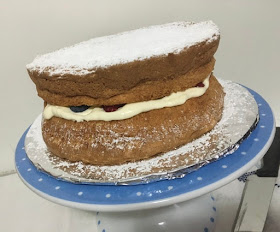 It is the 4th of July, American Independence Day. For all my US blogger friends, I have marked the occasion by making a Red, White and Blue Sponge Cake - aka sponge cake with strawberries, cream and blueberries.
I haven’t made a sponge for years. My mum often used to make sponge cake with strawberries and cream as a birthday cake for my brother, who loves it.
I reckon my sponge turned out pretty good: 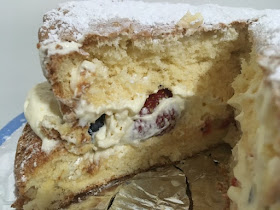 The recipe I used came from The Country Show Cookbook. This book contains a number of sponge cake recipes, so I was spoiled for choice.
I selected a recipe from Helen Wright from the Kyogle Show. Kyogle is in country New South Wales. I have never been there, but I will always remember the name because a Year 12 boy called Mick who went on the very last Senior’s Trip at my school (thanks to the personal injury liability risks) was photographed for the school magazine wearing a track suit top emblazoned with the word “TRAINING”. The caption was  “What do you train for in Kyogle, Mick?”
I still don’t know what Mick was training for in Kyogle, but this is a damn fine sponge cake recipe. It uses mostly cornflour, which makes the sponge feather light.
To make this sponge cake, you will need:
125g sugar
4 eggs, separated
70g cornflour
1 rounded dessert spoon plain flour
(Just make it a tablespoon and it will be fine)
1 teaspoon baking powder
1 teaspoon vanilla
Preheat your oven to 180 degrees Celsius, and grease and line 2 sandwich tins (8” round).
Beat the egg whites with the whisk attachment of a stand mixer until white and fluffy (or soft peaks form, in the old parlance). Continue beating while you slowly add the sugar and beat until stiff peaks form.
Break up the egg yolks with a fork then add to the egg whites and beat until just combined. Add the vanilla and mix until combined.
Sift the flours and baking powder over the egg mixture. Fold in gently with a spatula. Divide the batter evenly between the two sandwich tins, smooth the tops and drop the tins on the bench once or twice to knock out the air bubbles.
Place the cakes into the preheated oven and bake for 20 minutes. Line a cake rack with a tea towel and turn the cakes out onto it. Cover the cakes with the rest of the tea towels, and allow to cool.
Fill the cooled cakes with chantilly cream, chopped strawberries and blueberries. Sift icing sugar over the top of the upper cake. Serve while fresh.
Cakelaw at 4:40 PM
Share

Thanks for dropping by!